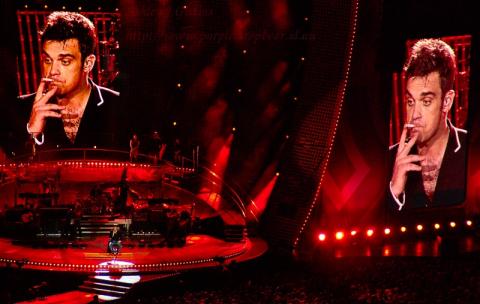 I have a theory about Robbie Williams. I think that he's addicted to the rush he gets from performing - let's face it, performing in front of a crowd _is_ a great rush. I think that when he's not doing it, his body aches for a replacement and it's all downhill from there.

Robbie stirred up a bit of a media frenzy when he was here in Brisbane by smoking on stage on both nights. The venue is smoke-free, part of our government's new laws against smoking. The venue did indeed fine him for smoking ($150 I think it was, from memory), and our Premier offered to step in and pay the fine for him, given that Robbie was a guest of Queensland blah blah. All quite amusing and I'm sure, exactly the sort of publicity that the RW team dream of (and often get).